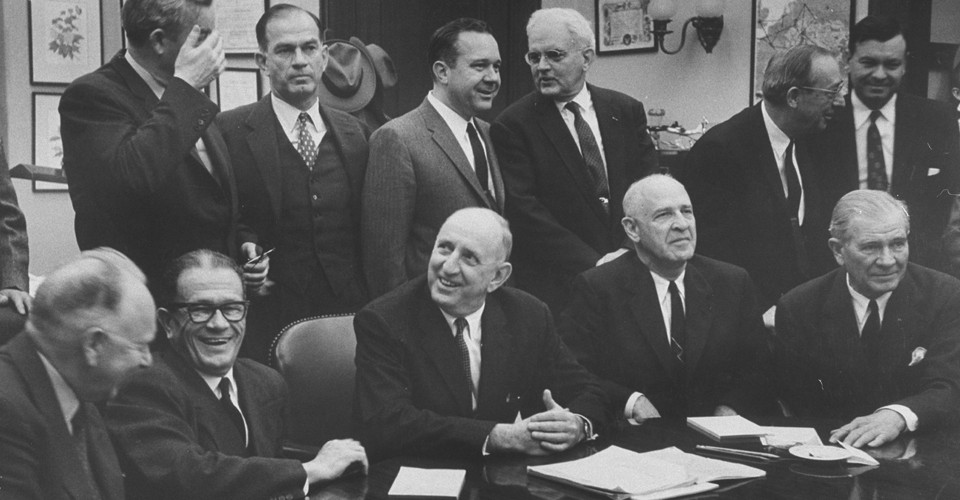 The End of the Filibuster?No, Really
Many activists will not tolerate a Democratic-controlled Senate that allows Republicans to block civil-rights legislation next year.

There is little doubt that if Democrats retake the Senate and the White House, the Republicans will be as obstructionist as they were under Obama. So if want to get anything done, they will have to face the issue of the filibuster. Mitch McConnell has warned the Democrats not to touch the filibuster but he is, of course, a unprincipled reptilian whose brain consists entirely of one giant amygdala, and who consequently is only interested in one thing: power. His open hypocrisy in stating that he would fill any SCOTUS vacancies that occur this year (after his refusal to bring Merrick Garland’s nomination up for a vote) amply demonstrates this fact. So we should ignore whatver he says about the filibuster. Rather than eliminate it entirely. I would like to propose a reform that would retain it while preventing Republican obstructionism while making the Senate more representative of the people.

Back in 2007, the Republicans controlled the Senate and had not yet eliminated the filibuster for judicial nominations. The Democrats used it often (but not nearly as often as the Rublicans were to use it during the Obama years) and came under fire as “obstructionists.” I wrote a piece urging the Democrats to take the offensive and defend themselves on the grounds that they represented the majority. At that time, 42% of Americans lived in states with two Democratic Senators, 40% in states with two Republican Senators, and 18% with one of each. Today, those figures are 44%, 40%, and 16% respectively (independent senators are counted with the party they caucus with).

The Democrats are in a good position to recapture the Senate in November. If so, their edge in constituents represented would likely increase. If they want to accomplish anything (assuming that they hold the House and gain the White House), they will have to do something about the filibuster. There is some debate concerning the constitutionality of the filibuster and they might well be tempted to abolish it altogether but I would like to suggest a better idea: on cloture votes (and only on cloture votes), weigh each senator’s vote according the population of their state and if the votes against cloture represent a majority of the US population, the vote fails. Pragmatically, it would make it virtually impossible for the Republicans to block anything and it can be defended as making the Senate more (small d) democratic. If the filibuster is a protection of minority rights, then this is one on steroids. In theory, a minority of only 18 Senators (representing the nine most populous states) could block a bill’s passage. I would also suggest that the filibuster as reformed be reinstated for judicial nominees.

Granted, there are one serious objection to this idea. The Constitution states (Art. I, sec. 3) that “each Senator shall have one Vote.” However, I think this can reasonably be construed to refer to votes on the passage of legislation and not to procedural votes such as closure. After all, the Constitution also says (Art. 1, Sec. 5) that “Each House may determine the Rules of its Proceedings.” The courts have given great deference to Congress’s procedural rules, holding them beyond judicial inquiry. The lead case is United States v. Ballin, 144 U.S. 1 (1892), where the Court stated

“The Constitution empowers each house to determineits rules of proceedings. It may not by its rules ignore con-stitutional restraints or violate fundamental rights, and thereshould be a reasonable relation between the mode or methodof proceeding established by the rule and ttie result which issought to be attained. But within these limitations all mat-ters of method are -open to, the determinatio. of the house,and it is no impeachment of the rule to say that some otherway would be better, more accurate or even more just. It isno objection to the’validity of -a rule that a different one hasbeen prescribed and in force for a length of time. The powerto make rules is not one which once exercised is exhausted. Itis a continuous power, always subject to be exercised by thehouse, and within the limitations, suggested, absolute andbeyond the challenge of any other body or tribunal.” 144 U.S. at 5.

But challenging weighted cloture votes presents a special problem. If the Democrats invoke cloture, the bill goes to a vote and then to the President. By the time a court can hear the case, the law in question will have duly passed both houses and been signed by the President, all in accordance with the Constitution. I can’t imagine any court invalidating a statute because it thinks the Senate should have debated longer. The case would be dismissed as moot. The courts could invoke the exception to mootness that it did in Roe v. Wade, i.e., that the issue was “capable of repetition, yet evading review.” However, even if the courts did ultimately strike down the procedure, the Democrats could then eliminate the filibuster altogether.

An idea worth considering, I think.

4 thoughts on “Reforming the filibuster”